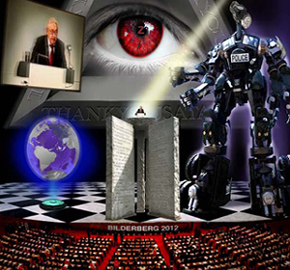 In short summary the Bilderberg Group is a faction of the Illuminati (a steering committee) whose purpose is to organize a structure of power that can bring about a one world government that will gain total control of the world’s money and economic system of trade.

The Bilderburg’s structure is an assembly of the world’s most powerful and wealthy individuals. They meet annually to coordinate their strategies and make participant/membership changes.


It is believed by many Christian theologians that this group is laying the ground work for a one world governmental structure which will be taken over and controlled by the Antichrist. (Book of Revelations 13,16–13,17):


"And he causeth all, both small and great, rich and poor, free and bond, to receive a mark in their right hand, or in their foreheads: And that no man might buy or sell, save he that had the mark, or the name of the beast, or the number of his name."

To some this may seem a bit far-fetched, but in reality its actually happening. In today’s economic world, how many people still use coins or paper money to make purchases? Its mostly done by using a piece of plastic (credit cards or bank debit cards), by mobile phones, or by electronic check or wire transfer.

If a one world government is formed, they will simply do away with plastic cards, paper and coin currency, and will replace it with an embedded computer chip or an electronic scanning mark containing an ID number that would be placed on a person’s hand or forehead or both. (This would fulfill the prophecy written in Revelations).

Also consider, currently, there are hundreds of thousands of animals, both domestic and wild that have had an identity chip embedded in their body. Many of the chips have a built in micro-tracking component so their movement can be monitored, while others just contain identity information, so you can see how easy it would be for this to start happening to humans. Everything is already in place. The fact is, the outerspace that is surrounding the Earth is full of orbiting satellites that are capable of tracking and monitoring every human being on Earth. 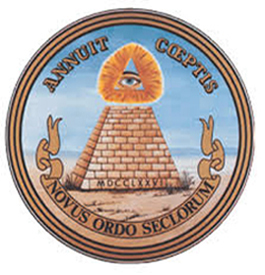 After this transition is complete, the worlds population would become digitally controlled through the use of this scanning mark, what is now known as a Automatic Identification and Data Capture Chip (RFID chip), that contains a person's electronic ID number. Money would cease to exist and be replaced by a digital, numerical value system. (Electronic Currency).

This would allow the one world government and the Antichrist to have almost complete control of the world’s population. They would control how much numerical value (currency) is deposited in your chip, what you can and cannot purchase, and even switch it off so a person could not buy or sell anything, not even food to eat.

Eventually, this would lead to people being forced to denounce their belief or faith in God and His son Jesus Christ. Each person would be required to affirm an oath or sign a document confirming their denunciation of God and Jesus Christ. Resistance or failure to comply would result in the shutdown of their electronic ID number, being placed in a detention center or even executed as Jesus warned in the (Book of Matthew 24:9).

The first known assembly of the Bilderberg was held at the Hotel de Bilderberg in Oosterbeek, Netherlands, on May 29, 1954. It was initiated by several people, including Polish politician-in-exile Józef Retinger, Prince Bernhard of the Netherlands, Belgian Prime Minister Paul Van Zeeland other undocumented attendees.

During this assembly, a guest list was to be drawn up the included inviting two attendees from various nations. Fifty delegates from 11 countries in Western then Europe attended the first conference, along with 11 Americans.

The success of the meeting led its organizers to schedule an annual conferences and permanent steering committee was established with Retinger appointed as permanent secretary.

The organizers also drew up a register of attendee names and contact details with the aim of creating an informal network of individuals who could call upon one another in a private capacity.

Conferences were held in France, Germany, and Denmark over the following three years. In 1957 the first U.S. conference was held on St. Simons Island, Georgia.

Since that time the Bilderberg has expanded its membership and grown into the most powerful organization in the world today.

The last meeting of the Bilderberg Group was held on May 5th - June 3rd, 2019 in Montreux, Switzerland. Each member that attended was carefully selected by the ruling counsel of the Illuminati. The next meeting is scheduled to take place in June, 2020, but is being rescheduled to a new date.


Referenced below is a list of locations where the last 15 meetings were held:

To learn more about the Bilderberg Organization, please visit these Internet URL links:

A Detailed Analysis of the Builderg History and Agenda.

The Six Main Goals of The Builderberg.

May the grace of God be upon you always,